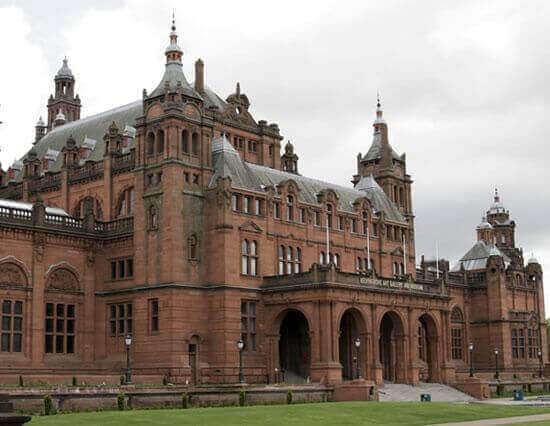 The Kelvingrove Art Gallery and Museum is the city of Glasgow's premier museum and art gallery. The building attracts over 1 million visitors each year and was described Neil MacGregor, the director of the British museum in London as "one of Europe's great civic art collections".

The museum is the second most popular visitor attraction in Scotland and the most visited museum in the United Kingdom outside London.

The original construction of Kelvingrove was partly funded by the proceeds of the 1888 international Exhibition held in Kelvingrove park. The building was designed in Spanish Baroque style and in the Glaswegian tradition of using red sandstone by Sir John W. Simpson and E.J Milner Allen and officially opened it's doors in 1902.

The Kelvingrove museum holds a vast range natural world exhibits including the 300 year old fossils of marine life that inhabited the Glasgow area. The museum also features one of the finest collections of arms and armour in the world.

Visitors of the art gallery are can marvel at magnificent range of art including work from the French impressionists, the old masters and the Scottish colourists. The art gallery features some of the most distinguished paintings of Salvador Dali and Rembrandt.

The building is located on Argyle Street opposite the Kelvin hall, on the banks of the River Kelvin in the city's West End. The building is adjacent to Kelvingrove Park and situated immediately beneath the main campus of the University of Glasgow.