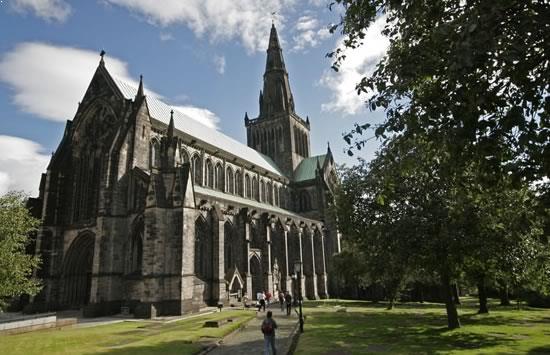 Sitting on the edge of Cathedral street, Glasgow Cathedral is the oldest building in Glasgow and one of the few medieval churches to have survived the reformation in Scotland unscathed. The Cathedral boasts a 105 ft high and 285x63 ft structure filled with awe inspiring intricate architecture and stained glass, and the last remaining intact tower on a Scottish medieval Church.

Although this had been a Christian site for well over a millennium, the stone building also known as St.Mungo's (the cities' patron Saint) was consecrated in the presence of King David I in 1136 and additions were made to the building over the next 300 years.

Glasgow Cathedral lies directly next to other attractions such as Provand's Lordship (the second oldest building in Glasgow) and St. Mungo's Museum of Religious Life and Art and despite it's medieval structure is positioned short walking distance from the heart of the modern shopping districts of the city centre.

Admission to the Cathedral is free, and guided tours are available as well as recitals and lectures. It was declared in 1451 by the Pope that a pilgrimage the Glasgow Cathedral held the same merit as one to Rome and as a founding piece in Scotland's as well as Glasgow's long history it is unsurprisingly heralded as a integral part of any visit to Glasgow.