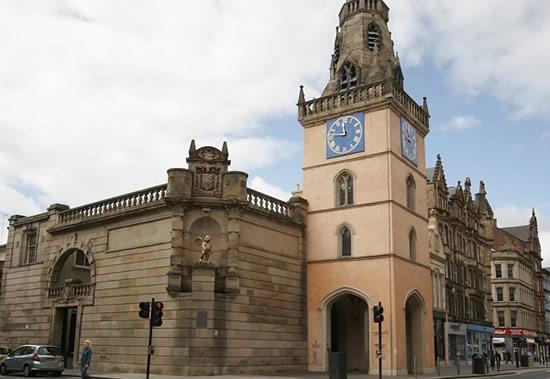 The Tron Steeple and Kirk that houses the present day Tron Theatre has played an integral part to Glasgow’s cultural fabric for almost 500 years and over the course of its colourful history, it has served as an important place of worship, a place of execution, a meeting hall, a market place, a police station and its current use as one of Glasgow’s leading theatres.

The building experienced a period of disuse in the 1970s until the Glasgow Theatre Club made use of this remarkable building in Glsgow’s Trongate in 1980. The Tron Theatre was established a year later in 1981 staging an extensive programme of touring prodction companies, jazz and rhythm & blues orchestras, a tradition which is revived at the Glasgow International Jazz Festival. The theatre’s facilities were enhanced with the opening of the main auditorium in 1982 and two years later, The Tron Theatre appointed Michael Boyd as the first Artistic Director.

The Tron Theatre’s resident production company were in the forefront of Scottish Theatre under Boyd’s direction, having won Glasgow Mayfest Paperboat Awards and a the LWT Plays on Stage Award. The Tron Theatre Company toured throughout the United States and Canada and have made a series of performances at the Edinburgh International Festival from the outset to the present day. During the 1980s, the Tron was a theatre club and was only opened to members and friends until the Victorian Bar & Restaurant were opened in 1990, making this remarkable theatre accessible to the public.

In 1996, The Tron Theatre was awarded £5 million for an extensive redevelopment project, funded by the Scottish Arts Council National Lottery Fund, Strathclyde European Partnership and Glasgow City Council. The Tron was officially reopened in July 1999 under the direction of Artistic Director Neil Murray and after successful completion this venue features much improved facilities and new spaces, with old preserved exteriors exquisitely juxtaposed with contemporary interiors of the auditorium, corporate and meeting rooms and the ever-popular Victorian Restaurant & Bar.

With healthy revenue generated from ticket sales of plays, concerts, Glasgow Festival Events and the Bar & Restaurant, the Tron Theatre continues to flourish as one of Glasgow's cutting edge theatre venues and production houses.